We can’t state that these social media apps are not doing their best to be the king of the hill. Recently, Snapchat released an update, called ‘Snap Map’. The new Snapchat function focuses on sharing the location of posted snaps to our story, which is public, and could be useful for, say, seeing a collection of Snaps from a particular event. But what snapchat doesn’t tell you is it that the Snap Map function will expose your exact location to anyone on your friends list every time you open the app. A lot of users already expressed their privacy concerns about this. But these social media companies do not take a step back in this cold war..

And this war has been going on since 2013, when Facebook attempted to buy Snapchat for a modest 3 billion dollars. Snapchat turned down the offer and not without success. The next couple years it had a tremendous growth by introducing features, that we know as: snapchat chat, stories, filters and discover. With growth of up to 158 million users and development of Snap ads, Snapchat is an established social phenomenon. However, there has been one big player holding a grudge against snapchat: Facebook. 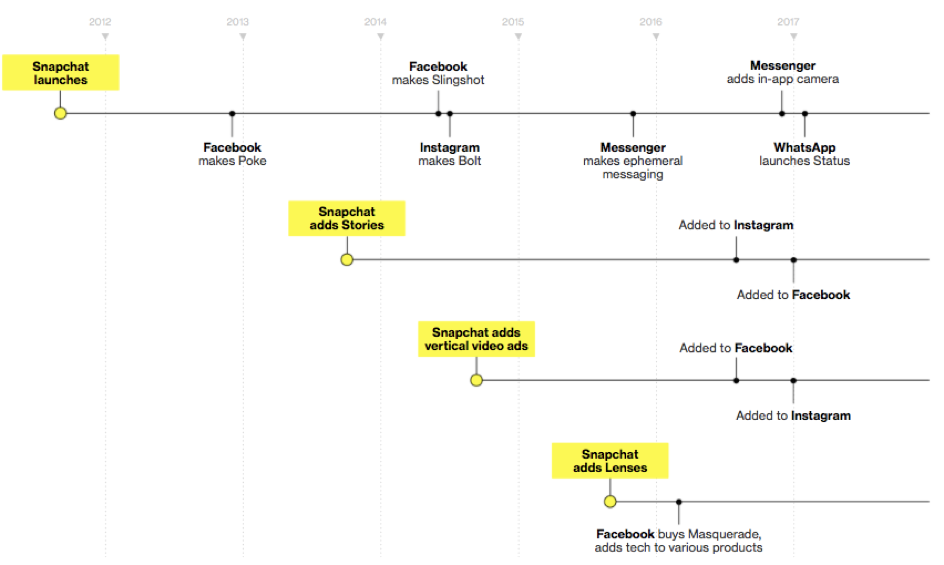 Since Facebook failed in acquiring Snapchat, they have been living by the motto: ‘if you can’t have it, destroy it’. The timeline above shows the measures that Facebook took, to eliminate snapchat from the market. By just copying Snapchat’s features and implementing them in their own applications, Instagram and WhatsApp, they finally managed to surpass Snapchat in 2016. With the feature Instagram stories, a simple copy of Snapchat story, they announced that they have over 200 million users at this point. Kind of problematic for Snapchat, since they had a stock market launch in February 2017 and the stocks have been decreasing in value ever since. And so ‘desperate times call for desperate measures’.

What’s next for snapchat?

So far the ‘Snap Map’ features have been only negatively in the news. And the launch of the Snapchat Spectacles doesn’t seem big enough to give the company a competitive advantage over the other players in the social media market. As Facebook is simply copying everything that leads Snapchat to success, the next couple years will be a big challenge for Snapchat. Can it hang with the big dogs and evolve into something greater or will it join the ranks of Twitter and Pinterest as a network that never lived up to its full potential? We’ll see..