Fasten your seatbelt and hold on tight, because we are approaching the end of the year! While everybody is slowly sorting out their plans for Saint Nicholas, looking up recipes for numerous Christmas dinners and figuring out their New Year’s resolutions, Bavaria goes out with a bang!

Ever since 1985, the Dutch family of brewers behind Bavaria strived to sell beer with the catchphrase: ‘Zo. Nu eerst een Bavaria’, which can be roughly translated to ‘But first, let’s drink Bavaria’. However, times have changed, as well as the people who drink Bavaria. At least, that is what they say.

Whereas Bavaria is known for being a quirky, rebellious, edgy brand with a focus on students, it seems like Bavaria shifted its focus towards exactly those students who got older, have found their significant other, are settled in, presumably have kids and a Labrador walking around the premises.

With a new mindset comes a new slogan: ‘Welcome to the family’.

Let me explain this bold move.

Why Bavaria chose for some serious slogan shifting

There are a couple of reasons for a company to change a slogan. One of the reasons to get rid of the old and take upon a new slogan, is because it simply doesn’t represent your company as it should represent it. Another reason is because customers do not associate the slogan (and the message it conveys) with the brand.

With this slogan it seems to be very clear that Bavaria wants to switch roles. Founder of marketing agency Mountview Ingmar De Lange explains that brands are often taking up roles, which one may compare with roles in movies. You have the hero, the villain, the joker and so forth. Whereas Bavaria was notoriously known as the young Max Verstappen among all Dutch beers, it now positions itself as the lovable, sweet as syrup hero, everybody has already forgotten about by the time they see the end credits.

However, the brand is all grown up now! And they decided to steer their boat full with beer in a different direction. While the slogan might seem inherently different from what they used to have, it is in fact a step back to its roots. Or perhaps differently said, it’s an alignment to its unique selling point: being the oldest, independently established, family of brewers. Lieke Duijmelings, marketing director of the brand, claims that they want to evoke feelings of togetherness and emphasize the unifying power of beer. Yes, also their slogan is in English now, because their plan is to internationalize the hell out of their brand. And by using the word ‘family’, the slogan is more accessible and it should give you that Coca-Cola feeling of happiness and warmth. 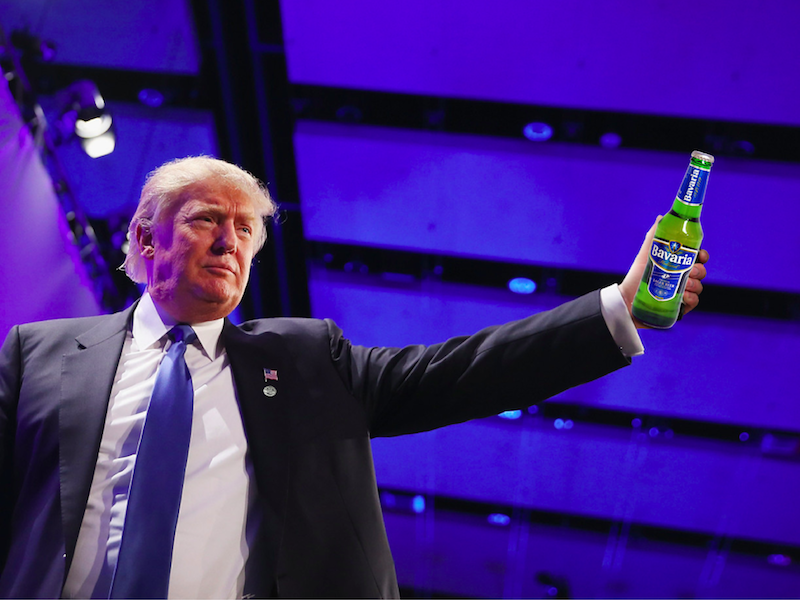 Speaking of different directions and countries that might need some unifying now, arrows are pointed at the US. Bavaria’s long term strategy is to increase its market share as it sees potential in the amount of people that enjoys craft beer. This is also the reason why they acquired Latis Imports, an American importer of Belgian craft beer as well as they partnered up with a British company called Molson Coors, which will be responsible for skyrocketing sales results in the States.

Even though this move seems a bit out of the blue, thorough research has in fact been done. Up until now, it resulted in the acquisition of a new company, new partnerships, some new additions to its range of different beers and an entire new look and feel. However, what I believe is most interesting in this matter, is to see how Bavaria is going to juggle between its internalization plans and staying close to its Dutch audience, who might feel alienated as a result of this drastic change. I guess this is something only time will tell.

Welcome to the Bavaria family

All in all, I have to admit that it’s a good time to introduce this change and launch their campaign before Christmas. A time which we like to spend with what I like to call the three F’s: friends, family and food.

Good timing indeed, but are we waiting for this to happen? Do we want to be part of another family during this time of year? If you’d ask me, their authenticity still lies within the rough, edgy and smelly bars that I go to in the center of Groningen. Even if you have never been here, you might know what I mean. Have you ever been to those bars where they still light candles, where you leave your jacket somewhere on top of a chair, only to find out hours later, after some heavy dancing with your friends, that somebody else took it (again)? Bavaria to me is heavy partying, making mistakes, making friends, making love and laughing about it in the morning. The aspect of family scares me, it feels like I am suddenly massively accountable for my (drunk) actions. It feels like I have to behave properly. Family to me is being and feeling safe, a safe haven.

If you’d ask me, I’d still like to party as if nothing changed. So -if I may-, this is what I like to add as your latest addition to the family. A new (and perhaps better) slogan, in case the other one doesn’t entirely work out: