Is it the new iPhone 7s? Is it the new Samsung Galaxy S8? No… it’s… uh… the Nokia 3310?! The most remarkable presentation at the Mobile world congress. Each year the mobile industry comes together to present their new highly anticipated gadgets at the Mobile World Congress in Barcelona.  While I was checking my Facebook on my highly innovative expensive smartphone, I noticed the future release of this prehistoric cheap cellphone. My first thought, how in the world is this phone going to compete with the established giants in the mobile industry? 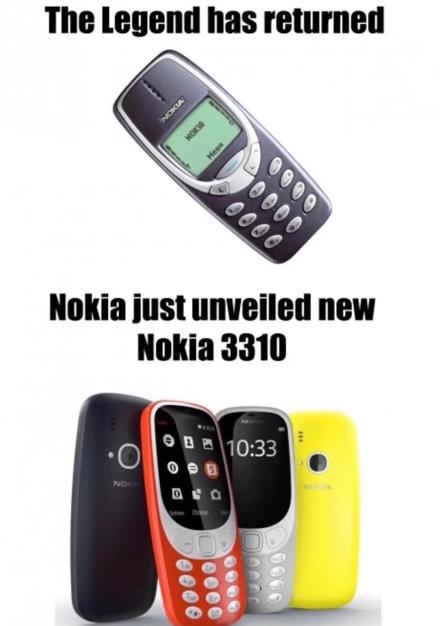 A trip down memory lane

Firstly, a brief history about the Finnish company. Nokia was founded in 1885 but took its first steps in the telecom industry in 1979. As we all know, the glory years of Nokia were in the 90s and early 2000s. Your mom, your neighbor and even their dog had a Nokia. Even though the Nokia 3310, launched in 2000, is not the best-selling Nokia phone, it is their most iconic phone. The phone is considered indestructible (mostly on the internet) and compared to my iPhone, the battery of the Nokia is infinite.

Back from the dead

While the big players keep innovating, Nokia decided to ignore the system. They took a leap back of 17 years and launched a phone we all already knew. This strategy, called ‘retrobranding’, relies on memories and emotions from the past. And those memories and emotions are strong in this case! Do you remember endlessly playing ‘snake’ on your parent's Nokia or the infamous Nokia ringtone everyone had?  The announcement created a big buzz for Nokia. 17 years later we are blessed to witness the resurrection of the most famous fossil: the Nokia 3310.

Why would Nokia want to throw away 17 years of technological innovation? We have smartwatches, smartlight and even smartfridges?! Wouldn’t it make sense to show the crowd a phone that fits society? Nokia paid good attention on the trends that are going around on the internet and took in count the emotional connection we have with the iconic phone. The buzz they created made newspapers, magazines and ironically this blog write about the once so famous brand. Besides the Nokia 3310, they also announced the Nokia 3, 5 and 6. Smartphones that actually could compete with the established companies we know. The resurrection of the Nokia 3310 isn’t there to compete with the iPhone and Samsung we already have. It’s simply there as a ploy to create buzz and give the Finnish company a huge comeback! Going against the system isn’t always that bad and even lets you stand out. Welcome back, Nokia!